You are here:
March 29, 2016Leave a commentBlogBy louise 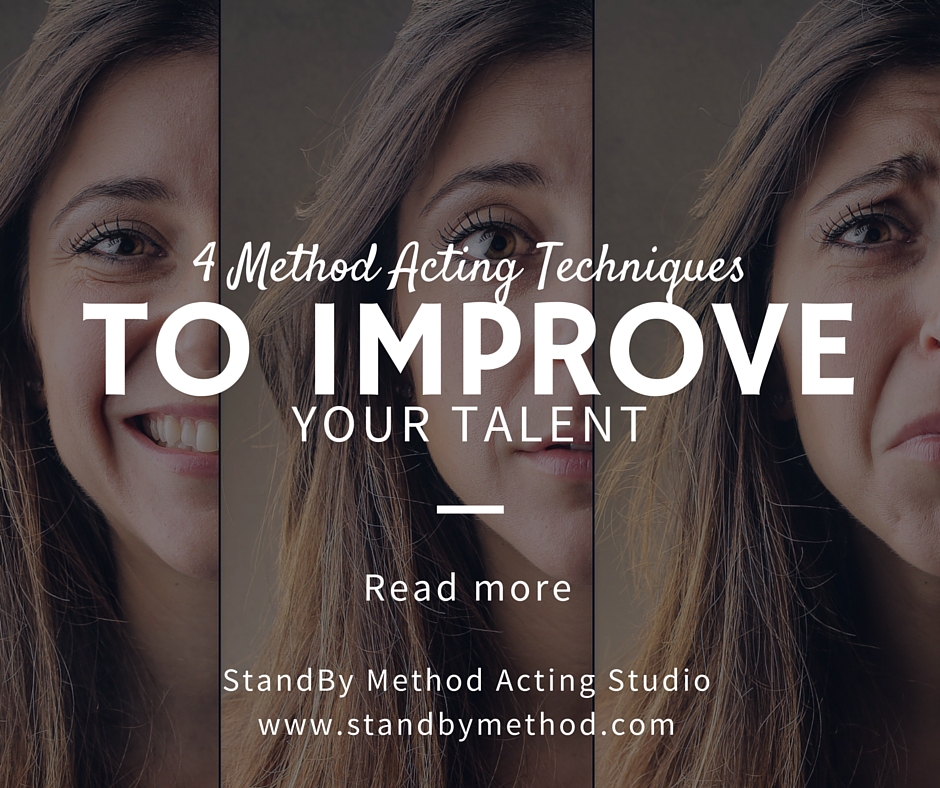 You want to be a world class actor right? You want to be taking on those serious challenging roles and get recognition like the world’s greatest Method Actors – DeNiro, Pacino, Brando, Hoffman, Bale, Streep? That is possible but firstly you must learn to walk before you can run. The Method Actors mentioned above and many others I haven’t mentioned, worked hard to master their craft; they were put through their paces by their acting coaches. The secret to success is not to rush (rushing gives mediocre results), but to be thorough and patient. It can take years to become a master of your craft. I am going to share with you 4 Method Acting techniques to improve your talent so you can fine tune your acting and be on your way to producing world class performances.

KNOW WHO YOU ARE

Lee Strasberg and Uta Hagen were amendment actors knew themselves before playing roles and so am I. You must understand what has shaped you, appreciate the experiences you have been through, know what your values and beliefs are and how you came to them and know how the things you have experienced have changed/affected you physically, mentally and emotionally. Without knowing who you are you will struggle to “get” the characters you play. Many of my students comment that not only do they learn how to act but they also learn more about themselves – invaluable for you to be able to portray someone else’s life. Without knowing yourself how do you empathise with a role?

Strasberg defined tension as the “occupational disease” of the actor. I wholeheartedly agree. Tension is not only physical but emotional and mental too. Tension is energy that has built up over your life from your unique experiences making you behave in particular patterns and habits. Tension manifests itself in the muscles via the nerves. When tension remains in the actors body, emotions or thoughts it makes the actors job much more difficult. Tension blocks access to the actors sub-conscious, their impulses and blocks the gateway to the imagination. Mental tension is the most difficult to release because of ingrained and hardwired mental habits, but it is possible. Many of my students don’t understand the importance of relaxation when they first begin the process of unravelling their habits, but soon after scene begins they notice how much of an impact tension has on their ability to artistically express. If you begin using relaxation you too will be able to undue lots of old habits AND be more present in each scene, enabling you to work truthfully in each moment.

Lots of people confuse Method Acting for immersing yourself in the role and becoming someone else. Becoming someone else is an impossibility and is a huge myth of Method Acting (you can read more method acting myths here), but I appreciate where this concept comes from. Method Actors do prepare their roles thoroughly. They prepare the role so much so that they know the role almost as well as they know themselves. This enables a Method Actor to express life in an artistic way and to bring something to the table. The Method Actor offers the director a lot to work with. You too can do this, as oppose to depending on the director to tell you how to say something, where to stand and what to do.

Acting is a visual art and everything you do on stage or screen tells a story. If you stand still not knowing what to do that tells a story to your director and audience that you don’t know what to do. It really is that simple. My acting students soon get used to receiving critiques along the lines of “the story you told was that you were nervous, your nerves came through in the way you spoke and your mannerisms, but in this scene XXX isn’t nervous, how might they behave?”. Acting is behaving truthfully under imaginary given circumstances as Sanford Meisner said; be aware of what story your behaviour or lack of it is telling your director and audience.

The techniques I have shared aren’t the full picture of The Method but are a very good starting point for improving your craft and talent. If you begin to work in this way you will notice big changes in your performances.

Have you found this useful? I’d love to connect with you and find out. Leave a comment in the comments box below. Share this with your acting friends, it could be just the thing they need to get them out of an acting funk.

If you found these tips useful, you can grab yourself more tips completely FREE. Louise O’Leary is a professional actress, method acting coach and Artistic Director of StandBy Method Acting Studio. Her mission is to help as many actors as she can achieve their acting dreams and become the best actor they can be. Join the hundreds of actors around the world who have downloaded her eBook “Respect your craft, discover my top 45 method acting secrets to launch your career“. Download here and be on your way to acting success today!

You can also head over to FACEBOOK to join in the conversations and receive inspirational advice and the best method acting tips every day.