The Fear of not being good enough

You are here:
July 12, 2016Leave a commentBlogBy louise 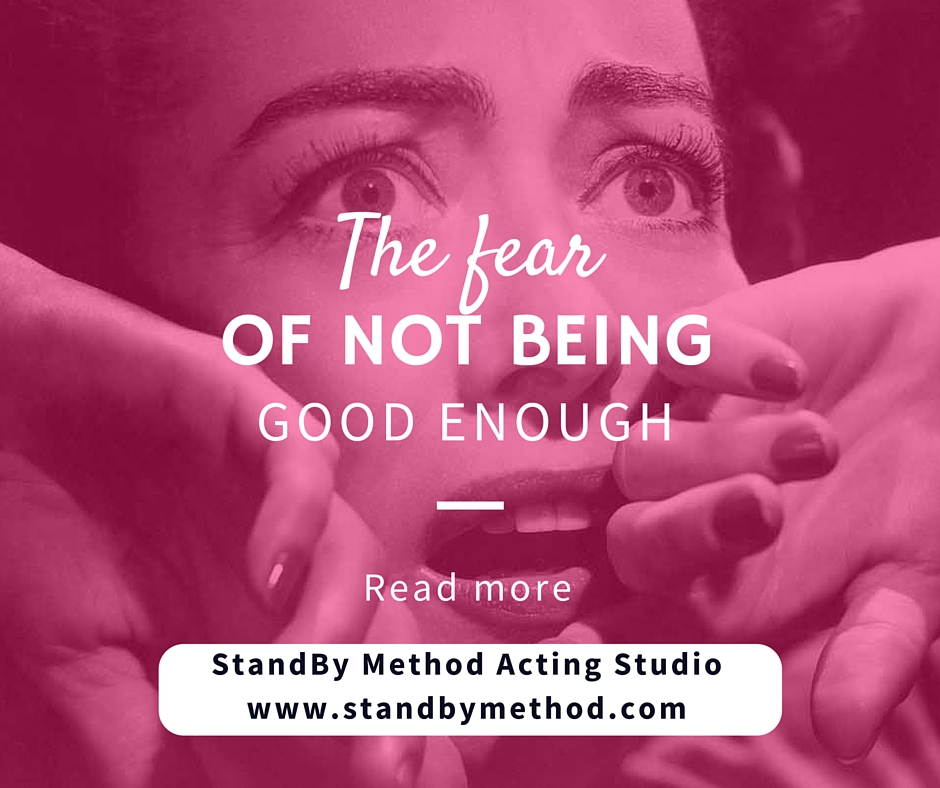 The fear of not being good enough is like a spider web; once we’re tangled in it, it’s very difficult to get out of. I plead guilty your honour to fearing not being good enough, I hold my hands up high and can honestly share with you that everything I speak about in today’s blog is something I have experienced with my acting journey at some point. And from many conversations over the years on the subject, it seems many other actors are guilty too.

Having the odd blip here and there is what I would call normal but it’s when it starts to take over your life, as it did with mine, that you need to have a re-think before it gets out of control.

I would spend days fearing I wasn’t good enough as an actress, despite all the evidence that told me other wise, and quite honestly it knocked me for six.

What I didn’t realise is that day by day this fear was snowballing. It was growing so freaking big it began to take over my life and quite quickly turned into a belief, which in turn was creating habits – procrastinating, not applying for roles, leaving my agent, making excuses as to why I hadn’t been to a casting for a while.

I ruminated over the things I’d heard (what you are about to read is not fictitious) – “that scene was f********g sh*t, I expected better from you” or “You should act like Emma, Emma’s smashing it” to “you were out of control in that scene”.

There was stacks of evidence against these few nasty comments I’d heard and don’t get me wrong I did snap back at that director who “encouraged” me to act like the lead role, but…

I was putting pressure on myself to be the perfect actor, when really (it took me years to learn this), there is no such thing as perfection.

What makes us feel we’re not good enough

The effects of not feeling good enough

Why do we feel we’re not good enough

There are many reasons, but here a few of the ones that crop up more than others in the conversations I’ve had with actors.

The fear of not being good enough

So how do you get over it?

Be honest with yourself – as soon as you can admit this fear to yourself you’re on the way to overcoming it, because it’s easier to spot the situations that trigger the fear so you can do something about it.

Surround yourself with encouraging people – the saying is that you become like the 5 people you spend the most time with. I’m not saying drop your friends, but I am saying that being around people who help you become the best version of yourself is going to greatly help you win this battle, so you can eventually achieve your acting goals

Take small steps everyday – towards your goals. One tiny bit of action will eventually develop into a big productive habit. You don’t have to have your shit together on day one, but by taking small steps you eventually will do.

How are you feeling after reading this? Can you relate? Let me know in the comments box below or share with a friend who could use this advise.

Don’t give up, just keep learning

If you found these tips useful, you can grab yourself more tips completely FREE. Louise O’Leary is a professional actress, method acting coach and Artistic Director of StandBy Method Acting Studio. Her mission is to help as many actors as she can achieve their acting dreams and become the best actor they can be. Join the hundreds of actors around the world who have downloaded her eBook “Respect your craft, discover my top 45 method acting secrets to launch your career“. Download here and be on your way to acting success today!

You can also head over to FACEBOOK to join in the conversations and receive inspirational advice and the best method acting tips every day.