10 reasons you didn’t land the role

You are here:
May 2, 2017Leave a commentBlogBy louise 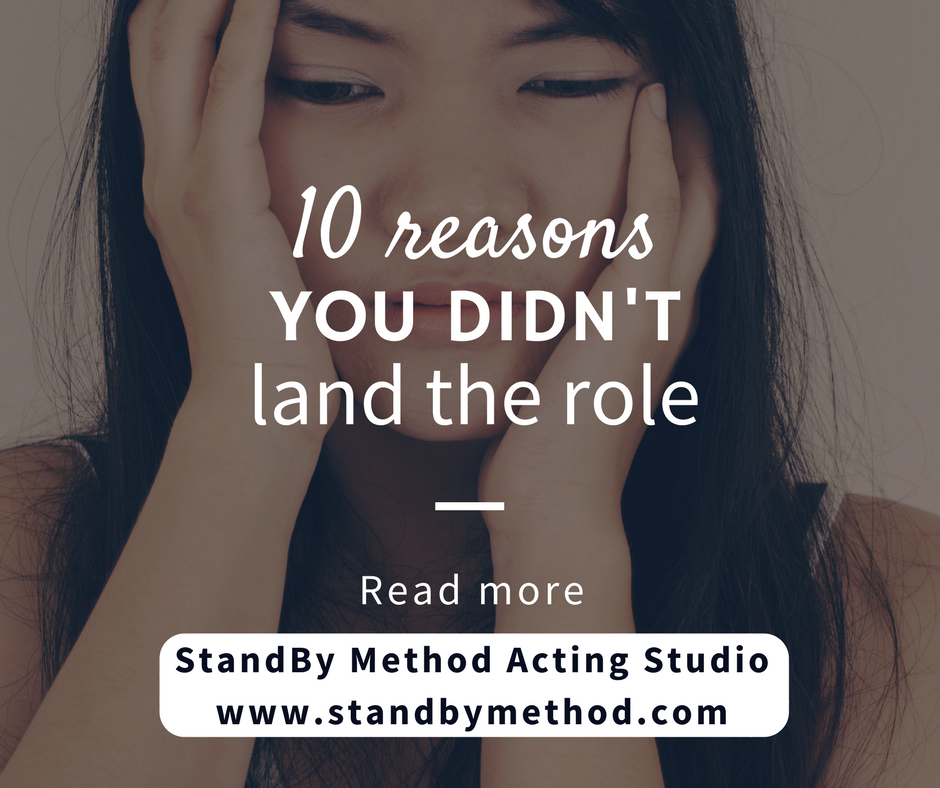 You come out of the audition feeling GOOD; you prepared well, arrived early, was pleasant to everyone in the room and feel you gave it your best shot. You try and forget about the audition because you don’t want to get your hopes up (this has happened before), but there’s a little part of you secretly imagining what it’s going to be like working on stage or set… A few days later you receive an email, your heart skips a beat, you open it and it says “unfortunately you weren’t successful” or worse still you hear NOTHING. You ask for feedback.. cue tumbleweed!! That leaves you in a bit of a pickle wondering what the hell went wrong. I’m going to share with you 10 reasons you didn’t land the role, and whilst this isn’t a definitive list (because each audition is unique), it is a good starting point for helping you find clarity so you can learn and grow from the experience.

10 REASONS YOU DIDN’T LAND THE ROLE

#1 – You didn’t have the right look (the director had a VERY specific look in mind) – you weren’t blonde enough, tall enough, fat enough, skinny enough, toned enough, freckly enough, kooky enough… and the list goes on…

#2 – The director chose an actor they already have a relationship with – they auditioned hundreds of people, but essentially went back to what they know, like and trust.

#3 – The director went with someone who had a bigger profile – they want the production to be a (financial as well as creative) success, and for that to happen they need someone who will put bums on seats.

#4  – The director changed their mind on what they wanted – sometimes the playing age is opened up, sometimes it depends on who’s been cast in the other roles, ultimately you are never going to know what is going on in the director’s head.

#5  – You didn’t click with the casting director/director/producer – You were pleasant with everyone, but somehow the panel just didn’t feel a connection with you that they’d made with another actor.

#6 – You made the same obvious choices the other 99% of actors did – sitting in a casting room all day long is exciting, but it can also be tedious when you see the same thing over and over and over again. It’s like x-factor, you’re just waiting to see someone who has that sparkle and has put their own stamp on the piece.

#7 – You came across too confident and made the CD or director feel uncomfortable – take this from someone who’s done that. I was asked about the character I was auditioning for and how I saw them. As I’d done so much prep work I blasted all this info out thinking they wanted to hear it all, not realising it made me sound just a little bit arrogant. The feedback was that I’d helped give a new perspective on the character but it was a no. I should have let my talent do the talking and tamed my mouth. A director never wants to feel uncomfortable/inferior to an actor.

#8 – Didn’t follow the director’s direction – you thought you did, but what the director or CD actually saw was the same thing you’d done a couple of minutes ago or something completely different to what they’d wanted. If in doubt always ask for clarification.

#9 – Nerves took over – you may not have even been aware of this. You see all actors have a default setting – it’s an habitual pattern of behaviour they go back to when nervous and stops them connecting to the character. I’ll repeat again – some actors aren’t even aware of this which is why it’s worth figuring out what your default setting is, so you know when it’s taking over. It’s also worth doing ample relaxation before every audition – after all relaxation is the foundation of method acting for that very reason.

#10 – Overstayed your welcome – You feel you did a good audition, but got too caught up in the moment and talked yourself out of a job.

and just for good measure, here is one more reason you didn’t land the role

#11 – You didn’t capture the essence of the character – you thought you did, but you went in with a preconceived idea which meant you had blinkers on ruling out anything else.

And there you have the 10 reasons you didn’t land the role (well 11). This blog isn’t meant to make you feel like crap, it’s there to help you see what could be going wrong when you’re not receiving feedback.

Let’s chat in the comments area below. If you want to share these tips with your acting friends who are struggling to land roles, just hit the social media icons below.