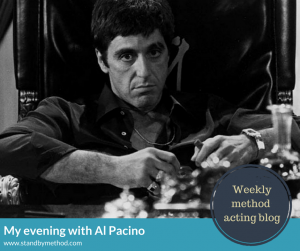 Saturday evening was a game changer for me, not only as an acting coach but an actress. I want to share with you the level of inspiration I felt and the knowledge I learnt from one of the world’s greatest method actors – AL PACINO.

The scene
I was sat in the Pavillion at my table wearing my best floor length dress glass of wine in hand, the lights were glistening from the ceiling, candles flickered all around the room and glasses of champagne flowed freely. There was an air of excitement, glamour and anticipation. It felt like I was at the Oscars – or at least how I imagine the Oscars to look.
The motivation
I made friends with many people and we talked and talked about my favourite subject – method acting, which seemed fitting given that Al is not only a multi-award winning method actor, but also co-president of The Actors Studio – where the inspiration for StandBy was born. Everyone I spoke to was so intrigued by this “method” and these “method actors” that are more often that not given a hard time in the press. It appeared that this was also going to be a hot topic for Al. I was there to soak up as much knowledge as I could.
The script
The atmosphere began to grow impatient as everyone wanted the night to move forward to catch a glimpse of their acting hero. There were a few actors in the audience but mainly fans of this legendary actor. The time had come and we were introduced to an outstanding 5 minute showreel – Tony Montana spoke those famous lines, Micheal Corleone’s voice echoed around the room, we went from Glenngary Glenn Ross, to Looking for Richard and everything in between finishing with Al’s brand new movie Danny Collins. What a showreel! That in itself was impressive.. but the best was yet to come.

Al entered the stage to a roar of applause and whooping. The moment everyone had been waiting for was upon us and he didn’t disappoint. Al owned the stage, he was confident, kind, funny, giving and it seemed spiritual too. His eyes lit up when he was prompted to talk about method acting (and so did mine). He went into a lesson on method, which of course I devoured. SO… what did he have to say?

As an actor you always aim to work from the unconscious; you prep it up so much so that after you have relaxed, your unconscious will appear as if from no where. You take inspiration from everywhere you possibly can. I couldn’t believe it, I felt like I was hearing my own words echoed that I have so often spoke in StandBy’s method classes. This was the ultimate confirmation for me that I as an actress work in a similar way to Al Pacino… AL PACINO! Wow and that I as method acting coach encourage my actors to work in a simliar way to him too. Al told many stories of times when he has been on set in the various films – or on stage, when all of a sudden, in the moment, he would do something that he hadn’t planned and wasn’t aware was going to happen. In his own words that was his unconscious taking over. I wanted to scream out ME TOO. I could have jumped on stage right that very moment and spoken for hours about the craft with him. It was sensational to hear, I was in my element and I hope reading these words gets the fire in your belly roaring too. 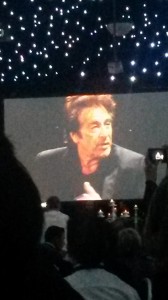 1. Work from the inside out

2. Fill up your sub-conscious with as much as possible

3. Offer your fellow actors many gifts to work with

5. Relax before you do any work

If you found these tips useful, you can grab yourself more tips completely FREE. Louise O’Leary is a professional method actress, acting

coach and CEO of StandBy Method Acting Studio. Her mission is to help as many actors as she can achieve their acting dreams and become the best actor they can be. Her eBook “Respect your craft, discover my top 45 method acting secrets to launch your career”, has helped hundreds of actors around the world.

It covers how to build a character, the business of acting, how to learn lines effectively and confidence in acting. Download your

copy here bit.ly/free45tipsbook to get on your way to acting success. Or head over to facebook.com/standBymethodactingstudio for inspirational advice and tips every day.