Where many actors go wrong (and how to fix it) 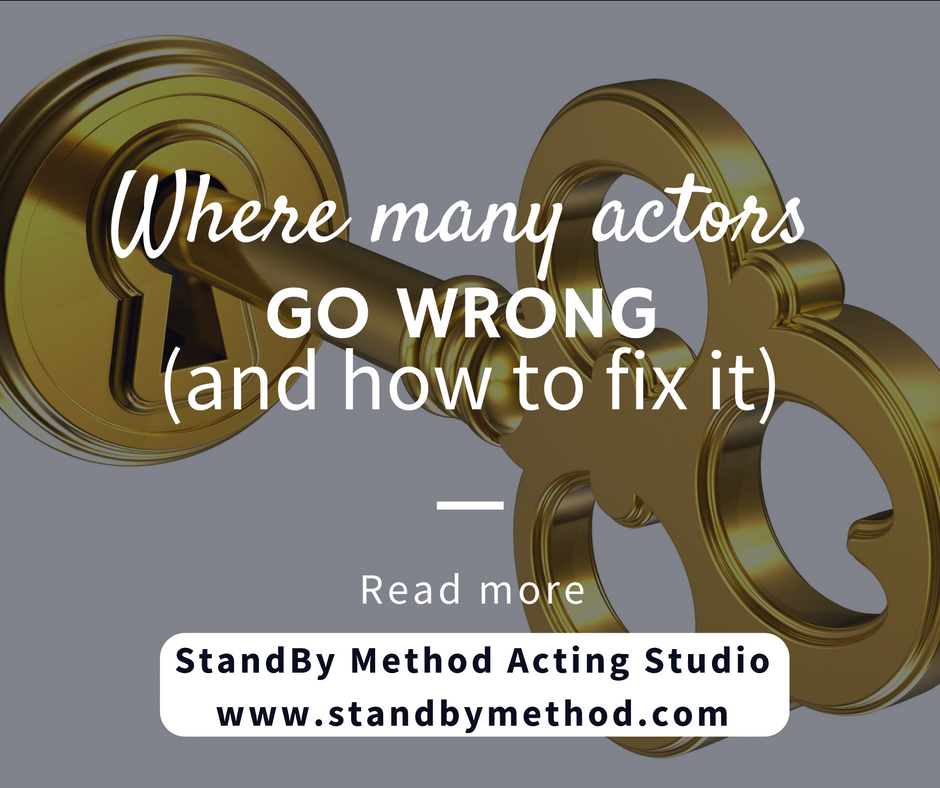 Many years ago I felt angry and frustrated that my acting career was at a stand still. I applied for role after role, kept up my training (even after drama school), utilised my contacts to get work, sought advice from successful, respected actors, spent most of my days on Spotlight and CCP but none of this was proving to be reliable or generating consistent work. I’d see people I trained with getting role after role and think ‘they must be lucky’, or I’d see actors on TV with very little to zero training and feel resentful that they were taking the jobs of “proper actors”, but having this mindset is where many actors go wrong because it’s placing the focus in the wrong places. Eventually I ended up spending more time in the day job, which of course my heart wasn’t in and made me miserable.

As I’ve learnt more and more about business over the years of running StandBy Method Acting Studio, it struck me that many actors simply don’t put their business hat on. You may or may not know how business works, I certainly didn’t when I first left drama school because business wasn’t taught, and not knowing anyone who ran a business left me vulnerable as an actor. If you don’t know much about business, your acting dreams could be vulnerable too.

WHERE MANY ACTORS GO WRONG

…AND HOW TO FIX IT

Actors are great creatives, but that is only one half of the coin. To build momentum with your career, you MUST give equal time to both the craft and business otherwise you are running nothing more than an expensive hobby.

A professional will have the discipline and commitment to work on both every single day, no excuses, whereas an amateur will make excuses.

So how can you fix these things?

One of two things can happen, either a year has passed by and you’re aware that you’re no closer to achieving your acting goals, or you make time each day to work on your acting but time passes by and you realise you’ve done nothing because you’ve been faffing on Facebook or with other things. A new habit is needed to chip away at the old one. You must give structure to your day and start small. 10 minutes per day on your craft and 10 minutes per day on the business of acting. Once you have done this for a week, increase the time you spend on each. By implementing structure and smaller time slots you are going to avoid the scatter gun approach of trying to cram bits of everything in, and will find yourself much more focused and productive, which will make it easier to keep up the habit. Where in your day is best to add in these 20 minutes to begin with?

This means that not much is being accomplished even though you may feel like you’re doing a lot. Usually our focus is on the wrong things when we’re not being productive or our skill set needs upgrading. Firstly, set yourself something to achieve that is a priority. This will give you something solid to work towards with urgency. Once you’re clear on your aims then combine them with the time management tip. When you commit to these you will start to see a shift in your results. I’m not claiming you will suddenly be cast as the lead in HBO’s next series, but I am saying that walls are built brick by brick with consistent effort.

POOR PLANNING (IF ANY)

Many actors I come across simply don’t have a plan in place. They continue doing the same things with the same results – very little work, which leads to frustration. Plans keep us focused and give us feedback when something isn’t working. Plans should focus on a specific goal, taking into account obstacles and how they can be overcome, they should have time limits on them and state clearly how the goal is going to be achieved. After the deadline has passed for a goal to be achieved, time should be booked out to review how the plan went, what worked and what didn’t, so you can refine future plans. Remember a goal without a plan is just a dream.

Many actors are not in the habit of working out the numbers, either because they don’t know how to, it hasn’t crossed their mind or they don’t value the importance of the numbers. Tracking numbers and percentages of your efforts is useful for you to see trends and patterns in what’s working and what isn’t in your approach to finding work.

Actors should be tracking how many applications they submit, how many auditions they book from the submissions, then how many jobs they book from the audition, this will give you the percentage conversion from application to work. Actors should also be working out the percentages in each category they’ve landed the work e.g commercials, theatre etc to see which category is bringing them the most and least income.

Working out the percentages throws up lots of useful info. You will be able to see which casting sites are worth keeping up and which ones are worth ditching. You will also be able to see where the majority of your income is being generated or not, which can help you refine your plans to stop you taking the scatter gun approach, and become more methodical in your mission of landing work. The numbers will also show you just how many applications you need to be submitting everyday/week/year to be landing the work and where you can spend more or less of your time. Without working out your conversion percentages you are literally going in blind and it will take you far longer to land the work as you’ll have no idea what’s working and what isn’t.

Staying in touch with your contacts are so important because you have no idea who is in their network of people. My Dad always used to say “it’s not what you know, it’s who you know that counts” and he’s right. Some actors are too afraid or shy to keep in touch with their contacts because they feel like they’re harassing them. The best way to keep on your connections radar is to be friendly. Don’t communicate solely to get work, communicate to develop the relationship.

This comes from not keeping track of money and throwing it into things in the moment, or at the last minute without taking into consideration the effect it has on everything else you have to pay for each month. Unless you are financially wealthy, this usually leads to actors being skint after Spotlight membership is due, or skint after that headshot session because it’s eaten into a large chunk of their money. Put a budget in place so you know exactly what you can save/invest each month into your acting business, so you don’t wind up with little money left for bills when you’ve had to pay out a lot in one go.

Again I see lots of actors applying for roles and agents willy nilly in the hope that they get something. You are not right for everything, which is a huge advantage (it will stop you wasting your time). This is where we work out our casting type. Our casting type places us in the market, highlighting the sorts of productions/agents we would be best suited to. Once you have this information you focus your attention ONLY on these productions/agents. Once again this stops you taking the scatter gun approach, and means your time is spent in a much more focused and productive way. Think about it like this, would you try and sell a yacht to someone who doesn’t have the money for it, is afraid of water and isn’t adventurous? You could try but you will have wasted your time and won’t get the sale. The same principle applies when you’re submitting yourself for everything and anything.

So now you know where many actors go wrong (and how to fix it), you can start to gain more clarity on how to move forward with your career and stop wasting time on the wrong things. Unfortunately nobody else is going to do this work for you unless you pay someone to do it! I have come to the conclusion that there is no such thing as a lucky actor; you create your own luck. Luck is about being in control of your career and taking responsibility.

Let me know in the comments box below, or share with an actor friend who is fed up and could do with some focus.